Over the last year I’ve felt as if I’ve reached a plateau. I cannot put my finger on why this is or why I feel like this but regardless of what programming language I use C/Perl/Java I feel like I’m just moving boxes. This is not the first time I’ve felt like this either. 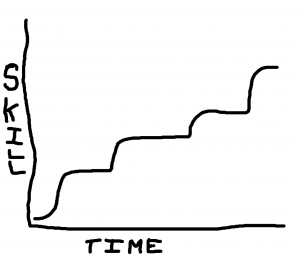 After a while (not a very long while) developing CRUD applications loses its appeal. Developing network apps, GUI’s etc… they all start to look dull when you’ve done them a few times. My experience with GUI’s is very limited so the above statement is an assumption in that regard.

I’ve no idea why this is but I’m sure more experienced programmers could probably shed some light on this. I personally think that unless something stretches your ability it will eventually lose it’s novelty.

Though, surely as a programmer who loves to program I should be able to entertain myself in almost any application I write but for me this does not seem to be the case. I’ve never been one for mental wanking and I would prefer not to start. Over complicating an application just to keep it interesting doesn’t appeal to me in the slightest. I watch programmers fall into this trap all the time and its sad to see them commit this cardinal sin. The worst thing is having to watch them explain their contraption as if it’s a simple solution when it’s obviously a complicated  mess of a thing. Don’t get me wrong I’ve been guilty of this sin and in quite a few cases been oblivious of it. Its almost as bad as the Not Invented Here syndrome so prevalent in our trade.

I personally think my main problem is that I don’t feel as if I am getting any better. I look at old applications and where I would normally see a dozen ways to improve it I see two or none and it’s not because it’s perfect or anywhere close, only a fool would believe so. I know I’ve not learned a fraction of what I need to know in my field so why have I hit this wall. Have I reached the limits of my ability or is this a normal phenomenon that programmers go through?

My opinion is that I’m seeing things through the wrong goggles. Most of my education has been self taught so its been led mostly by interest as opposed to formally taught. I’ve been studying with the Open University for several years now in order to get some background mathematics etc but I still think there are areas that I need to improve on in particular around Computer Science.

Unfortunately the Open University computing courses are geared towards popular topics, Java etc in order to attract more students. Having done a few of their computing courses I wish I hadn’t bothered because I gained more from my own work than I did from the taught courses. I cannot say the same thing about the mathematics though. I decided to start mathematics because I knew that whatever I learnt would be applicable regardless of the current fashion or trends in industry and it won’t be out of date in a couple of decades.

Having looked around this for some time I have decided that what I need to do is to start my own computer science program to build on the mathematics I’m doing with the Open University. The areas I’m really interested in is how to go about writing my own computer language, compiler, virtual machine etc so I’ve been looking around to see what other universities are doing and what books they are using in this area.

Having done a fair bit of looking I spotted a definite trend towards functional languages and the further I looked into this the more I noticed that All Roads Lead To Lisp. Or to scheme or to some variant thereof. Abstracting a bit further I am being steered towards learning a functional language. The two languages that interest me the most in this area are Scheme and Haskell. Now all I need to do is decide what books and resources I need to start a course in this area. Most resources online point towards Structure and Interpretation of Computer Programs (SICP) in order to get started so I am looking at this now. I am not sure if I’ll try and tackle Haskell until I get a bit more familiar with scheme although having looked at Haskell the language is appealing to me.

Watch this space for more installments on my self taught Comp Sci education!

2 Replies to “Self Taught Computer Science”