Some people are mad and some are crazy but there are some people who we are unable to categorise. I know two of these, it’s Jennies parents. If you are wondering why I think they are doo lally have a look at Tandem Canada.
I am insanely jealous. Paul’s a fit bugger and has been cycling longer than I have been alive but it’s has to be Pauline that takes the biscuit. She didn’t start cycling until a couple of years ago.

I finally got around to getting my PADI Open Water diving qualification while I was on holiday. Its something I have meant to do for a long time.
We decided to go to Key Largo to do it. Jenny made a few phone calls and to be honest the prices where all quite similar, $400 to $450 each. We eventually phoned Pleasure Diver.
Jenny asked them if they could squeeze us in the following day and they said they could, they also offered to lend us their DVD player so that we could watch the PADI DVD’s in our room. This extra effort on their part sold them to us and although we did not know it at the time we had really landed on our feet.
What we liked about Don and Janet was the fact that they had paid attention to lots of the details and that they went out of their way to help us. It was a real personal service and judging from what I have heard about larger dive outfits this is quite rare.
Everything was very relaxed and when we went out on the boat if the visibility was bad we would move somewhere else. We could have quite happily have dived in the areas and got the qualification but as far as Don and Janet was concerned getting the qualification should be fun which means you should be able to see wildlife or anything else you wanted to see while doing it.
It was also made interesting each time because instead of going through the motions and coming up we would do some exercises and then go looking at the wildlife and then do some more etc etc. This took the monotony out of the course while consolidating the pool work.
Another thing I didn’t expect was to have Chocolate Brownies waiting for us after each dive. They also laid on complimentary refreshments. After breathing all the dry air an ice cold bottle of water and a chocolate Brownie was exactly what the doctor ordered.
We both noticed that a lot of effort was put into customer service. We did not know it at the time but they had owned a B&B in Virginia which meant they really knew there stuff when it came to looking after guests and it showed in everything they did. The fact that they limit passengers to 6 on a 40 foot boat is a good indication that they know what it means to travel in comfort.
We spent 4 days there and I want to go back to dive with them again. For anyone interested in diving and thinking about the Keys then I could not recommend Pleasure Diver enough.

I had the pleasure of visiting the black sea when I was in the navy and one incident from that visit really stuck in my mind. We where visiting Odessa which, bar this incident was a beautiful place to be. To cut a long story short we were going out into town and to get there we had to climb the Potemkin Steps which where made famous by a Sergei Mikhailovich Eisensteinenstein’s movie
The Battleship Potemkin.
Or another review for the movie buff’s 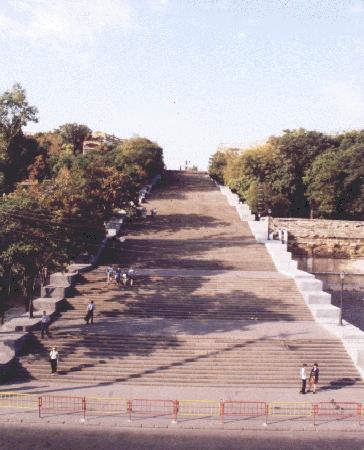 It was at the foot of these steps where we where greeted by a young lady handing out flyers. Innocently I took one and the following was the message. I still have the original. The steps have actually been designed so that the top is narrower than the bottom to make them look even more impressive.
Everything including spelling and Grammar are as per the original.
Start
To the Sailors of the NATO Navy
Gentlemen! Continuing active visits of foreign war ships to the berths of Odessa and other Soviet ports show the dangerous tendency to direct occupation of Black Sea Northern coat and of country as whole, which is masked under the name of “partnership for peace”.
We know about existing of American plan “Drop shot” foreseeing the landing of a half-million army army to the Odessa region with the following attack against Kiev and Moscow. It isn’t a secret that exist Western plans to reduction the population of Ukraine from 52 to 15 million with the help of destroying medicine, organisation of famine and spreading of AIDS. Tensity have artificially created around Ukraine and other Slav states.
It’s resembling that Yugoslavian events of the last years have considered by USA and NATO as a range for the further split of geopolitical area of USSR. One can see a directed playing of “Chechan card” and “Crimean card”. The degree of USA intervention into our social and political life mount to defiant scopes.
We, Soviet people, shall defend our Motherland by using all possible methods and shan’t allow to neither foreigners nor traitors to play the master here.
Please bring to the notice of your President, Government, leadership of Pentagon and NATO block that further increas-ing of the West presence on the Soviet territory will oblige us to consider any military man of NATO stepped on our land as a representativve of occupation army, with all consequences arising thereof.
Go Home!
Patriotic Forces

End
Needless to say this greeting was not what I was expecting and it did put a bit of a damper on the whole trip to Odessa. We where very pleased to find out that the residents of Odessa were a very nice bunch of people and we had several really good nights there.

I have left the robots gathering links and pages for the last few days and the results are as follows. I am off for a couple of weeks one of which will be spent in a cottage in Wales which should be nice so there will be little or no action for quite a while here.
62.0 Million links found
11.9 Million unique links found

13-18 April 1997
We found ourselves in Haifa, Israel. The strangest thing for me and this is coming from someone who has lived in Northern Ireland, Nearly everyone carry’s guns. We were in a bar and behind it we could see several automatic weapons. The waitress’s who happened to be all teenagers were doing national service and in their spare time they would wait tables etc. it was them who owned the guns.
I might add that in Israel or at least Haifa these young fly by night waitress’s did not get paid by the bar, they only got the tips punters provided which we were blissfully unaware of until one of them who got a bit disgruntled with our lack of generosity was kind enough to tell us. Needless to say that we got a bit more generous after realizing that a disgruntled spotty teenager with a semi-automatic weapon at her disposal was probably not going to do anyone any favours.